Ever since rafting on the Li River on New Year’s Day in 2012, I’ve wanted to make each New Year’s Day a day of adventure to set the next 365 days off to a great start. Two years ago for 2013, I drove the Apache Trail after exploring Tonto National Monument. Last year I spent the day working, but you can’t have it better than I did giving tours of a National Historic Landmark. 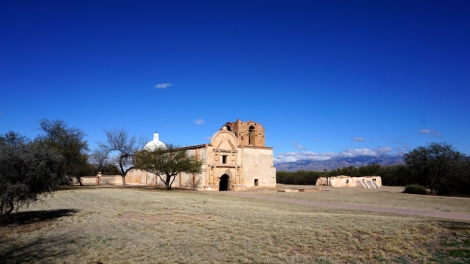 This year to celebrate the first day I took a drive down to Tumacacori National Historic Park south of Tucson, Arizona. It was beautiful with such fascinating history. It isn’t quite as spectacular as San Xavier further north, but this old Spanish mission is still a lovely relic of the days of yore.

This was the first European settlement in what is now the southwestern United States and played an important role in the Spanish expansion in the West. Father Kino established the mission in 1691, and the current mission buildings were built in 1821. When they began designing the church it was to match the baroque grandeur of San Xavier, but over the next 20 years it was scaled back dramatically while still retaining some of the baroque charm.

Major restoration work began in 1908 when Pres. Roosevelt declared the site a National Monument. The visitor center and museum buildings were built in the 1930s. 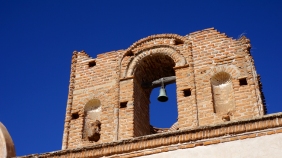 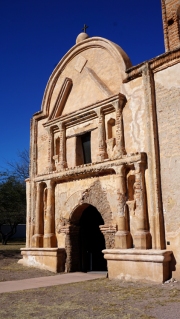 the abbey building next to the church 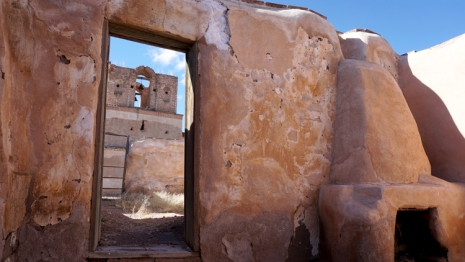 Walking through the space you can really imagine what it may have been like for the early parishioners worshipping in the space. There are still glimpses of the original murals that once covered the walls and alcoves where statues of saints stood above altars.

Immediately to the right inside the sanctuary is the baptistery. Then, at the end, is the altar area with a high domed square ceiling. This roof is still original with some of that fantastic art faintly showing a shadow of the past elaborate decoration.

Behind the mission church is the mission cemetery with a small round chapel in the middle of a walled graveyard with niches for the Stations of the Cross. The visible graves are not historic, but from more recent years. There’s also a fantastic storage room. For my LDS readers, this space appears to be like a bishop’s storehouse. 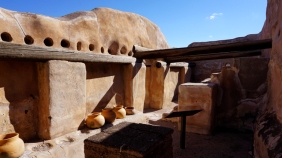 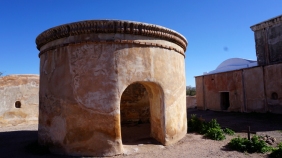 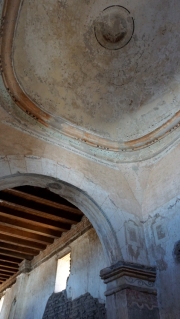 notice the fading murals on the original plaster

the abbey building next to the church 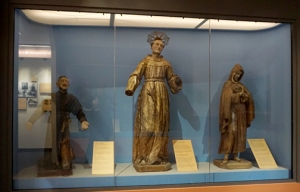 a few of the original Santos on display in the museum, which were mostly second-hand for this frontier mission

Across the site are ruins of the older Jesuit church, abbey housing, a lime kiln and historic farming areas. Also built on the site is a recreated traditional shelter made by the Pima people constructed of ocotillo branches.

The museum in the visitor center offers insight into the history of the people, site and region as it grew and changed over time.

Just up the road is Tubac. This is where the Spanish presidio was built in Arizona to protect the area’s mission settlements against the attacks of the Apache people who live nearby. I decided to stop at the Tubac State Historical Park on my way back north. Though the property gave a great insight into the area’s history, it was kind of a disappointing experience after having just explored Tumacacori.

There’s not really anything left of the original presidio, but one of the coolest parts of Arizona’s first state park is the staircase that leads down into a gallery showing parts of the foundation of the presidio.

Rather than the original presidio, the site now houses a nice museum and some historic buildings to Arizona’s oldest city such as a school house and family residence. The museum houses a collection of artifacts telling southern Arizona’s story very well. The jewel of the collection though is the press from the first newspaper of Arizona making the park a Historic Site in Journalism as designated by the Society of Professional Journalists.

I also enjoyed the exhibition of photographs on display in the old schoolhouse. It was a collection of hummingbird images beautifully capturing their colors and movement. Also, in the schoolhouse is a collection of historic maps showing the region go through territorial changes over hundreds of years.

The rest of Tubac feels like a wannabe Sedona. It is an artsy town with several galleries, but not fine art galleries more craft galleries. I feel that this picture sums it up best:

Another interesting tidbit about Tubac: it is the place from which Juan Bautista de Anza began his journey to claim California for Spain. What was the cause of his major expedition? The Russians had already made it to California and built a fort north of the Bay Area. Spain didn’t want them to claim anything further south. Interesting, right!?

My journey back to Phoenix was taking me right by San Xavier, so I pulled off for another visit to this spectacular holy edifice. It was the perfect ending to a great first day. 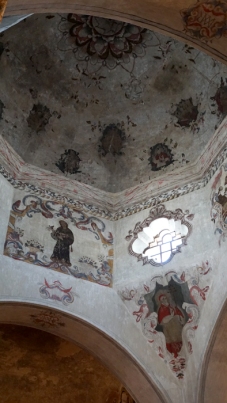 There's a reason she's won so many accolades for her work! Patti LuPone, the Broadway legend, performed some spectacular selections this evening at UVU. So glad I could be there.
It was a great day to get up in the mountains and visit some elk! Members of @utahtourguides went to the Hardware Wildlife Management Area or Hardware Ranch just outside of Hyrum, Utah where they feed wild elk for a few months each winter to keep them from raiding hay stores at nearby farms. They offer horse-drawn wagon rides to get out and see the elk and learn about these amazing animals, our state mammal.
Ever wonder why the South shuts down with "just a little bit of snow"? This is why. This storm has kept me in Texas two days longer than expected because of cancelled flights. Hopefully it clears enough by tomorrow to fly home.
On our way out of Houston, we visited the 567-foot San Jacinto Monument where Texas independence was won. Unfortunately, the elevator was broken, so we couldn't go up. We did see some wild pigs and a beautiful blue heron.
Galveston, even on an overcast day, is charming. The magnificent Victorian homes in their rainbow of colors, the beach with shells and birds, and the rich history and heritage made for an enjoyable and satisfying day. The highlights for me were the Bishop's Palace and the Juneteenth mural at the site where it happened.
After the last few fantastic sessions of the NFTGA national conference, we explored the final two missions of the San Antonio UNESCO World Heritage Site. Then, on our way to Houston, we detoured through Gonzales, TX. It is the birthplace of the Texas Revolution where the "Come and Take It" flag originated.
Such a fun night at the Knibbe Ranch for the @nftgausa national conference! Music, cattle, dancing, brisket, and more! Of note is the prehistoric history with an authentic bison jump site that has revealed buckets of archeological treasures and the amazing Texas history of the Knibbe family.
Another great day at the @nftgausa national conference in San Antonio. The panel and keynote in the morning were insightful, the networking and discussions invaluable, and the tour of the historic Spanish missions a delight.
Fun first day in San Antonio for the NFTGA national conference!
Loading Comments...
%d bloggers like this: