Flagstaff, Arizona has its roots as a lumber town, which is kind of ironic since it is now a town full of hipsters and environmentalists. The lumber industry is what helped the town grow and get the amenities it needed thanks to one family that owned the largest lumber mill in the area. This was the Riordan family.

Preserving this story and heritage is Riordan Mansion State Historic Park right next to Northern Arizona University, which happens to be in Flagstaff because of Riordan influence.

Here’s the short version of their story: one of the Riordan brothers moved to the area to run a large lumber mill. He brought his brothers to town to be managers for the operation. Eventually, the three brothers bought the business and then the oldest one decided to go do something else leaving the two other brothers to make things happen. They were very successful.

In 1904, the two brothers hired famed Arts & Crafts architect Charles Whittlesey who was working on Grand Canyon’s El Tovar Hotel at the time to build them a home. What he built them was a “log” mansion built in the Arts & Crafts style. I say it is a faux log cabin because you can clearly see that the round log boards are merely a facade.

Since I work at a historic home giving tours, I thought it would be interesting to visit this historic home on my way through Flagstaff. You enter off of the NAU campus and make your way to the visitor center to begin a tour.

This building is the original garage the brothers had built as they started bringing some of the first automobiles to the area. It mirros the shape of the larger home (they are both sort of horseshoe shaped so together they create a hexagon) and provides plenty of space for a few cars. However, the architect didn’t think cars would last too long, so he made the garage so it could function as a stable as well.

The tour takes guests through the entire house. One side has been decorated with artifacts and furnishings from the families as it would have been during their occupation. In this section photography is not allowed. It is two main floors. The upstairs has the bedrooms and bathrooms all around a central open space that has a light well through the middle to let natural light flood all of the interior spaces from top to bottom.

The first floor has a nice kitchen, breakfast room that’s big enough to be a dining room, a massive dining room with a table shaped like a football, an inglenook, a large living room with hanging porch swing for a couch, an office area and my favorite feature—beautifully crafted built-in cabinetry around the whole space. 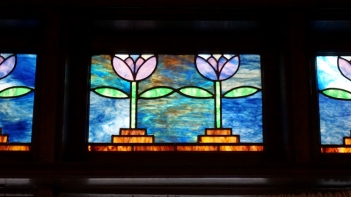 As mentioned the central space between the two homes is a multi-purpose gathering space. It isn’t much bigger than the actual living rooms, but there’s a main central fire place, a seating area and billiards table. Being an Arts & Crafts style home, there aren’t a lot of big art pieces because the architecture, carpentry, and natural materials are the art. However, in this central room, there are beautiful early photographic transparency windows. The photos were of majestic scenery of the Southwest and Native American portraits and were absolutely beautiful.

The other half of this massive duplex has been turned more into a museum on the main floor without much original furniture and displays about the family, area and logging industry. Photography was allowed in there, so that’s where my interior shots come from. Included in the collection are some fabulous pieces of furniture including some Stickley pieces.

Tours are every hour on the hour from 11 a.m. – 4 p.m. during the winter. Admission is $10 for adults and helps keep the park running. There is also a self-guided walking tour around the exterior of the home that touches on Arts & Crafts architecture, the Riordan family and history of the area.

“You build a bigger telescope”

Did you know Pluto was discovered in 1930 by analyzing dots in photographs to see if anything moved that were captured through an astrograph (telescope that exclusively takes pictures) in Flagstaff? Yeah, I didn’t either until I visited the Pluto Telescope Dome at Lowell Observatory on Mars Hill in Flagstaff.

The National Historic Landmark observatory offers a tour of the facility that ends at the Pluto Telescope Dome. I didn’t make it for the whole tour, but just in time to run up the hill and see the dome and telescope. Then I hung around as the sun set and the real action began.

In 1894, Percival Lowell created the observatory to search for evidence of life on Mars, which he was convinced of and used his discoveries to support his hypothesis even though nobody else could see it. Over the next 100+ years important work took place at the observatory and its peripheral research telescopes. The concept of an expanding universe took root there, Pluto was discovered there, maps of the moon were created for the moon landings from Mars Hill, and a team discovered that Uranus has rings.

Today, most of the domes on Mars Hill are for educational purposes. The observatory’s main research is done with a few larger telescopes in less light-polluted areas of Northern Arizona including from the Discovery Channel Telescope, which is one of the largest in the world.

a couple of the many telescopes at Lowell Observatory

Tours are offered of the property throughout the afternoon, and you can walk around on your own as well. There is a solar system walk, a galaxy walk and a universe walk, each of which tells you about the respective entity, what they are made of and important discoveries about them. 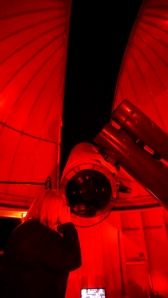 The real fun though comes as the sun begins to dip to the horizon. This is when they have special programming and they open up or bring out telescopes for viewing. It was spectacular. I got to see the moon up close, witness a two-star system, ogle at Uranus, and spy on millions of stars in fuzzy and not-so-fuzzy clusters.

The observatory has a very nice visitor center currently housing a fantastic exhibit about the Hubble Space Telescope and shows a documentary about the Discovery Channel Telescope.

I highly recommend a visit to the Lowell Observatory. Go in the afternoon so you can catch a tour before it gets dark and before what I’ll call the party gets started though it may be a rather geeky party. It is only $12 for adults and is open Mon, Wed, Fri, Sat Noon – 9:30 p.m. and Tue, Thu, Sun Noon – 5:00 p.m. Check their website for extended hours for certain times of the year.