Over the past couple of years, my brother-in-law has visited all 21 Spanish missions in California along historic El Camino Real. Two years ago when I visited we admired the Carmel Mission. This time around we experienced San Juan Bautista Mission about 30 minutes away from Monterey. The mission was established in 1797 by the successor of Junipero Serra who established the mission tradition in California.

The original church was built in the early 1800s and was the widest of California’s mission churches. Being built directly above the San Andreas Fault Line, the 1906 earthquake brought down the sanctuary’s walls. It was restored in 1976.

Today when you visit the mission, you enter through a shop that was once a storeroom. Next to the shop, down the covered walk around the mission courtyard, is a museum sharing the history and artifacts of San Juan Bautista including a scale model of the original mission, amazingly large hymnals from the mission’s musical past and beautiful furniture and religious artifacts associated with the people and place.

At the end of the covered walkway is the side entrance to the main sanctuary. The chapel is large and simply adorned with colorful painted patterns accenting the white adobe walls. At the end of the nave your eye is drawn to the back altar wall with six niches built into simple yet exquisite cabinetry each displaying a saint’s effigy. At the rear of the church to the side of the main entrance is a small chapel with baptistry, and out another side door is the old cemetery. Notice the paw prints in the terracotta floor tiles imprinted by the mission’s pest control as the ceramics were sundried.

Behind the main nave is a smaller chapel. This space is accessible from a side door in the garden. It is also simply decorated with exposed whitewashed roughhewn timber beams above, just like the main sanctuary, and mottled yellow painted walls around. This chapel is set up more in-the-round with the altar area in the center of a side wall and seats on three sides. The garden is lovely with a lush mix of desert botanicals and imported flowers and roses.

The mission’s façade is very straightforward in design with its only real architectural detail being the bell tower done in a very simplified Spanish baroque style.

Just beside the church and cemetery is the fault line and a remnant of El Camino Real, the road that connected the California missions making easy passage for anyone on the journey. You’ll even see some mustard flowers growing in the scrub that are undoubtedly ancestors of the yellow blooming plants the monks and priests planted to mark the path in its early days. 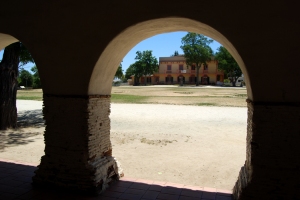 The front arcade of the mission forms one side of the historic town plaza. Two of the other sides have old buildings that make up the San Juan Bautista State Historic Park. We decided to check these out too since we were already there. A visit to the state park begins in the Plaza Hotel owned by the Zanetta family, which just so happens to be the family with the other large house on the town square that reads Plaza Hall on the front and the stables next to it.

The park has the hotel and Zanetta home staged nicely with historic furniture, accessories and vignettes. The hotel had guest rooms, a gaming parlor, and saloon with entertainment space. Out back is a chicken coop with Spanish chickens and an orchard.

Next door to the hotel is a long adobe home once occupied by the Castro and Breen families. The first floor of this building is setup as a museum with interactive displays of the history of San Juan Bautista (the town got its name from the mission) and the families that settled there. One of those being the Breen family, survivors of the tragic Donner Party incident. Their backyard has lots of space that is used by the state park for living history demonstrations, in particular cooking.

Kitty-corner from the adobe home are the Plaza Stables. Inside is a fantastic collection of buggies, carriages and wagons and a creepy taxidermized mountain lion. Behind the stables is a workshop with blacksmith and carpenter space. One of them was working when we visited. There is also more carriage collection and a couple of smaller historic buildings.

I recommend visiting the state park when interpreters are there to tell the story rather than just walking through the old houses. Also, be prepared with cash since the state park is still operating like it’s stuck in history by only accepting paper currency instead of plastic.

Throughout the town are other historic sites and some great old architecture. There are shops, restaurants and ice cream parlors making it a nice little town for a day trip.

The mission is beautiful and worth seeing if you’re in the area. 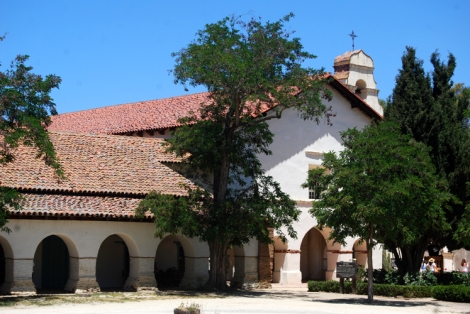