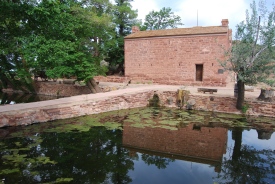 On my drive back from Utah, I decided to stop at two locations important to the Honeymoon Trail (read more about that here or here) and now part of the rich history of the American west.

Pipe Spring National Monument is located off Highway 389 between Hurricane, Utah and Fredonia, Arizona on the Arizona Strip, which is a large relatively flat plain that covers thousands of acres just north of the Grand Canyon. This NM is on the Kaibab-Paiute Reservation and tells the story of three distinct cultures, belief systems and peoples who interacted in this region.

Those three groups of people are the Native Americans who have called this region home and used the water from the spring for hundreds of years before White settlers came to town; the Mormons who used the Arizona Strip as a cattle ranch and claimed possession of the spring by building a fort over the top of it to control the water for agriculture, distribution, etc.; and the U.S. government with its explorers and later the National Park Service.

This site is a brilliant example of misunderstanding between cultures and how it can affect everything from a way of life to the land itself.

A visit to Pipe Spring NM begins in the visitors’ center and museum where the story of all three groups is told – the good, the bad and the ugly. Most interestingly the disputes that happened there are similar to disputes today about the rights to natural resources, in this case the most valuable – water.

When you leave the museum you enter National Park Service property. It is a small site with the historic building known as Winsor Castle, the spring with holding ponds, examples of agriculture from all times of occupation, and other auxiliary structures.

Every half hour a tour of the fort begins led by a ranger. It takes you through all of the rooms of the building. Most interesting are the personal anecdotes from those who previously lived there. Our ranger seemed to have done a lot of research and knew the former residents quite well.

After the tour, I took the short rim trail that takes you up the ridge behind the house with grand vistas of the Arizona Strip and some beautiful desert landscape.

In the early 1920s, the first director of the National Park Service was making the trip between Zion NP and Grand Canyon NP. He planned to make a quick stop at Pipe Spring, but due to car problems ended up staying about a week. During that time he learned the rich history of this site and decided it should be preserved. It also happens to be a great half-way point for people going between those two larger national parks especially back then when cars traveled slower on not-so-great roads. Anyway, he went back to D.C. and had Pipe Spring designated a national monument.

I highly recommend a stop here. If you’re making the trip from Zion to Grand Canyon or vice versa or just traveling from Arizona to Utah, take an hour or two to get caught up on the history of this region.

My next stop, Lee’s Ferry, is detailed in the next post.