Our last couple of days in Beijing were spent with training for what we would experience as teachers in China and in general what we would experience living in China. It was a couple of long days but worth it with lots of information and ideas for teaching, which starts soon. After our trainings though, we had some free time that I used to go on a couple more adventures.

The blot on the landscape?

After another adventure to the Silk Market via subway, an adventure in and of itself, I made it to something I’ve wanted to see all week after reading about it in my Lonely Planet guidebook. I didn’t get to go inside but the outside is magnificent. It’s the National Center for the Performing Arts.

According to the Lonely Planet description, this building was designed by ADP Aeroports de Paris, the one design that didn’t incorporate influences from the neighboring Hall of the People or Forbidden City. The building is a big dome made of metal and glass. Its surrounded by a reflecting pool that completes the image creating a full oval that looks like either an ear of corn, a lotus blossom or who knows what. You tell me.

Some people consider it a blot on the landscape, but I find it beautiful. To get back to the hostel we walked by the gate to the Forbidden City and Tiananmen Square, which are beautiful at night.

On my last night in Beijing, I joined some of the other teachers seeing a show called Chun Yi: The Legend of Kung Fu. It was a fantastic show that told the story and journey of Chun Yi who was dropped off at a monastery as a young boy by his mother. He did not want to be there and then he saw kung fu. It was then that he decided to stay and train.

The show displays many amazing fetes of acrobatics and martial arts as it tells the boy’s coming-of-age story. The production describes kung fu as an art that teaches harmony and working as a group to achieve harmony. The art strives to be in balance with nature using it as a teacher. This is where the animal styles of kung fu come from, the mirroring of nature.

Chun Yi goes through different stages as he progresses in the story including temptation and overcoming personal selfish desires. One of my favorite scenes is when they demonstrate the animal styles of kung fu in their basic forms. You could really see how the movements of the animals inspired these styles. 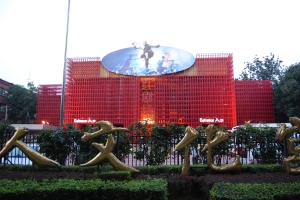 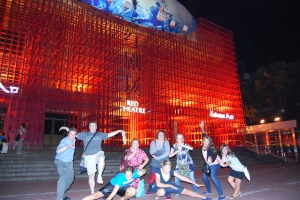 No photos were permitted during this show, but we got a fun kung fu pic outside afterward. This show had a great production value with wonderful sets, lighting and effects. The story was told in English so we didn’t have to watch subtitles but could watch the stage. For some reason, I was deeply touched while watching this production. I felt that this is where I should be right now. I had a confirmation that I should be in China.

The next day I would be leaving Beijing for Hefei and had no clue what lay ahead of me. Beijing is amazing and I’m sure I’ll find myself back there again at some point before I leave this great land.

One response to “Two Other Beijing Adventures”

Luminaria with a cousin
Approved the proof of my 2023 calendar today and had a few minutes, so I had a quick photoshoot at Sugar House Park. It looks great! Order your copy today! Link in bio.
I've now been making calendars for more than 10 years! My 2023 calendar is again themed to Utah since that's where most of my adventures over the past year have taken place as a tour guide. On my tours, I've experienced Utah's magnificent scenery and historic places at different times of year and in different lighting and weather. I live in an amazing place! You can get a copy for yourself and/or several as gifts. This year, they're $18 each or $16 each when your order 3 or more. To place your order, fill out the Google form linked in my bio. There's a limited quantity, so order yours today!
I made pies--mixed berry and pumpkin!
Halloween fun! Around 3 hours of trick-or-treating led to a huge haul for the kids. Dinner cooked in a pumpkin and awesome jack-o-lanterns.
Two fantastic adventures today! This morning began with a wonderful tour at the Smith Family Archeological Preserve (@archaeologicalconservancy ) near Utah Lake seeing hundreds of Fremont-era petroglyphs.
New flowers--orange, purple, and black for Halloween--and new photos printed for the wall (from France, see story for details). Also, some other fun or pretty fall things like decorating pumpkins, visiting the pumpkin patch with friends (third year, new tradition!), and lovely scenery from walks.
Paris Day 3 - Louis Vuitton Foundation, Musee des Arts Forains, Eiffel Tower
Thank you, @preservationutah , for a wonderful tour in this fabulous historic home! The architecture and design are stupendous, and the stories of the people made it come to life. Ready to share what I learned with tour guests!
Loading Comments...
%d bloggers like this: