One must-see for everyone who visits China is the Great Wall. Originally built many centuries ago by the joining of many city walls when China united under one emperor, the Great Wall is magnificent. 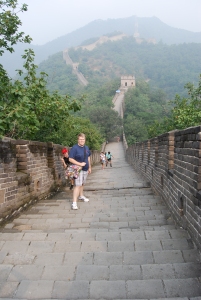 Because of the wall’s age, the weather and many regime changes since, the wall has fallen into disrepair in many places, been ransacked for building materials and rebuilt as tourist destinations. The section we visited is just outside of Beijing and is one that has been restored for the massive amounts of tourists who visit each day.

On the way to the wall, we drove through many small villages and through the mountains, but unfortunately, the smog from Beijing reached all the way out to the wall and made panoramic views near impossible to see, let alone photograph. That didn’t matter much because I was on the Great Wall … of China.

Since it has been restored as one of the tourist sections of the wall, there was a little market lining the path to the ticket booth and gate with shop owners trying to drag you into to buy trinkets, t-shirts and more. (side note: there was an Oba Mao shirt with a picture of President Obama dressed as Chairman Mao that says something like “helps the people” in Chinese and there were many versions of “I climbed the Great Wall of China shirts.” I ended up getting both at the silk market the next day.) 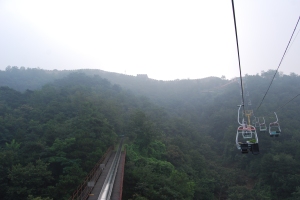 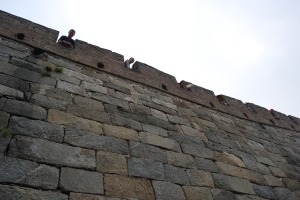 To get to the wall, you can either hike up or for a little more money ride a chairlift or gondola up. I opted for the chairlift to get some aerial views. My lift ticket was round trip meaning I could ride the lift down or take the alpine slide.

One on the wall, you realize how magnificent it really is, even if it isn’t completely original. I walked down the wall one way taking pictures and back up the other way taking more pictures and constantly hoping that some of the more scenic and panoramic pictures would come out okay with all the haze. I had lots of fun and thoroughly enjoyed getting lots of random and fun pictures like a Samuel the Lamanite picture.

When I didn’t want to hike up and down anymore, I rode the slide down. It is very long and could be lots of fun, but if you get behind a Chinese person, be prepared to slow down. They seem to use it more as a mode of transportation than a means of enjoyment or entertainment. I was going pretty fast for about a quarter of the way then had to hit the brakes. They also have guards spread out along the path to tell you to slow down and remind you of no pictures on the slide.

Hopefully, while here I can visit the wall at another section with less pollution to see the grand views and length of the wall. On a side note, if anyone was wondering, I am officially a man. After all, Chairman Mao said “He who has not climbed the Great Wall is not a true man.”

From the wall we journeyed on to a jade factory, which is more of a jade carving shop and showroom/shop. We were told about jade and its superstitious meaning and uses and taught how to distinguish the real from the fake (even though the markets do a really good job of mimicking the real jade with glass and marble).

We had a delicious lunch

there in their restaurant and spent some time looking around. As nice as many of the carvings and things were, they were way too expensive for me at this point of my journey. Maybe before I leave I’ll buy some real jade for good luck.

Our next stop was part of one very large historical area, the Ming Tombs. the tombs of the emperors and their families and servants are scattered over several kilometers at the foot of the mountains (which we couldn’t see because of the haze). From previous experience, our program directors and tour guide knew that the most interesting part to the majority of us would be the Spirit Walk at the entrance to the tomb area, so that’s where we went.

This path takes you past many beautifully carved marble statues of animals, real and mythical, and court officials of the emperors. My favorites were the dragon-turtle and the camels. For some reason I never found out, each kind of animal had two pairs or four total on either side of the path, one pair sitting and the other standing.

Each statue was masterfully carved many hundred years ago. With that age some have been repaired with newly carved marble being cemented where the old fell off. This was obvious. I enjoyed the leisurely walk under the willow trees admiring the statues.

(The connection I’m posting this on is even slower than the other connection so pictures will come soon, hopefully.)

One response to “We’re on the Great Wall … of China!”